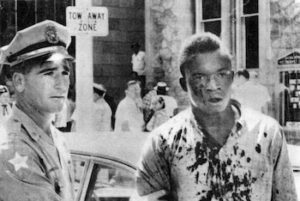 *On this date in 1960, “Ax Handle Saturday” occurred.  This was a racially motivated attack that took place in Hemming Park in Jacksonville, Florida.

A group of white men attacked Blacks who were engaging in sit-in protests opposing Jim Crow segregation. The attack took its name from the ax handles used by the attackers.  Earlier that month (August 13) Black sit-ins began when students asked to be served at the segregated lunch counter at Woolworths, Morrison's Cafeteria, and other eateries. They were denied service and kicked, spit at, and addressed with racial slurs.  Because of its high visibility and patronage, Hemming Park and surrounding stores were the sites of numerous civil rights demonstrations in the 1960s.

On August 27, 1960, a group of 200 middle-aged and older white men (allegedly some were also members of the Ku Klux Klan) gathered in Hemming Park armed with baseball bats and ax handles.  They attacked the protesters conducting sit-ins. The violence spread, and the white mob started attacking all Blacks insight.

Rumors were rampant on both sides that the unrest was spreading around the county (in reality, the violence stayed in relatively the same location, and did not spill over into the mostly white, upper-class Cedar Hills neighborhood, for example). A local Black street gang called the "Boomerangs" attempted to protect the demonstrators.

Although police had not intervened when the protesters were attacked, they became involved, arresting members of the Boomerangs and other Black residents who attempted to stop the beatings.  Nat Glover, who would later work in Jacksonville law enforcement for 37 years, including eight years as Sheriff of Jacksonville, recalled stumbling into the riot. Glover said he ran to the police, expecting them to arrest the thugs, but was told to leave town or risk being killed.

Several whites had joined the Black protesters on that day. Richard Charles Parker, a 25-year-old student attending Florida State University was among them. White protesters were the object of particular dislike by racists, so when the fight began, Parker was hustled out of the area for his own protection.

The police had been watching him and arrested him as an instigator, charging him with vagrancy, disorderly conduct and inciting a riot. After Parker stated that he was proud to be a member of the NAACP, Judge John Santora sentenced him to 90 days in jail.  Snyder Memorial Methodist Episcopal Church hosted community discussions and negotiations following the incident. Lunch counters in Jacksonville were desegregated in 1961.