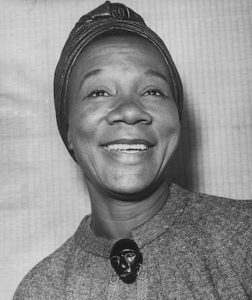 The birth of Beah Richards in 1920 is celebrated on this date.  She was a Black actress and poet.

Born in Vicksburg, MS, as Beulah Richardson, her birth name, she was the daughter of Beulah Molton Richardson, a seamstress and Parent Teacher's Association (PTA) advocate, and Wesley R. Richardson.  Before becoming a professional, Richards attended college and studied acting in San Diego.  She spent most of her career onstage and only appeared in a few films.

In 1951, she moved to New York, getting her first professional acting job in 1954 when she worked in an off-Broadway production of "Take a Giant Step" Over the rest of the decade, her stage appearances were spotty and she did not get much of a break until she joined a national touring company for a production of "Raisin in the Sun" in the early 1960s. She had a smaller role in "The Miracle Worker" (1962). It was director Otto Preminger who provided Richards with her biggest role when he co-starred her in "Hurry, Sundown" (1967) after seeing her impressive starring performance in the play "The Amen Corner."

Her most famous role was that of Sidney Poitier's mother in "Guess Who's Coming to Dinner," 1967, the part that won her an Oscar nomination for Best Supporting Actress.   She did, however, continue working on-stage, in television, and in the film "Beloved" (1998). She won an Emmy Award days before her death in Vicksburg, on Sept. 14, 2000.