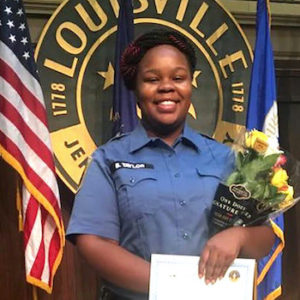 Taylor was a 26-year-old Black emergency medical technician.  The three plainclothes officers used a no-knock search warrant to enter her apartment in Louisville, Kentucky. Gunfire was exchanged between Taylor's boyfriend, Kenneth Walker, and the officers. Walker said that he believed that the officers were intruders. The LMPD officers fired over twenty shots. Taylor was shot eight times, and LMPD Sergeant Jonathan Mattingly was injured by gunfire. Another police officer and an LMPD lieutenant were on the scene when the warrant was executed.

The primary targets of the LMPD investigation were Jamarcus Glover and Adrian Walker, suspects of selling drugs from a house more than 10 miles away. Glover had a prior relationship with Taylor. The search warrant included Taylor's residence because it was suspected that Glover received packages containing drugs at Taylor's apartment and because a car registered to Taylor had been seen parked on several occasions in front of Glover's house. No drugs were found in the apartment.  Walker was licensed to carry a firearm and fired first, injuring a law enforcement officer, whereupon police returned fire into the apartment with more than 20 rounds.

According to a wrongful death lawsuit filed against the police by the Taylor family's attorney, the officers, who entered Taylor's home without knocking or announcing a search warrant, opened fire "with a total disregard for the value of human life. In June 2020, Democrats in Congress introduced the Justice in Policing Act of 2020, a broad bill containing measures to combat misconduct, excessive force, and racial bias in policing. The bill would prohibit the issuance of no-knock warrants (like the kind used in the raid that resulted in Taylor's killing) in federal drug investigations and incentivize states to enact a similar prohibition.  Her murder is another addition to the list of Black victims of Law Enforcement that the Black Lives Matter movement is attempting to reform.

Kentucky's Senator Rand Paul introduced the Justice for Breonna Taylor Act, which would prohibit federal law enforcement from carrying out a warrant "until after the officer provides notice of his or her authority and purpose." It would also apply to state and local law enforcement that receive funding from the Justice Department.  On June 10, the Louisville city council voted unanimously to ban no-knock search warrants. The law is called Breonna's Law and requires all officers who serve warrants to wear body cameras and have them turned on from at least five minutes before the warrant is served to at least five minutes after.