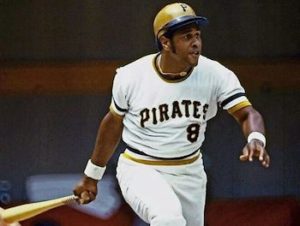 *On this date in 1941, Willie Stargell was born. He was a Black professional baseball player.

He was born Wilver Dornel Stargell in Earlsboro, Oklahoma, with ancestry of African and Seminole Native American descent.

During the early 1950s, his family moved to Alameda, California, and as a child, he spent many hours a day on Alameda public housing sandlots playing baseball. Stargell would clown around West Oakland and Alameda as a young boy with his friends. One time, he and his buddies sneaked into the Skippy Peanut Butter factory on Webster Street, pierced the peanut boxes, and took the peanuts home to roast. Another time, they climbed over a fence into the Alameda Naval Air Station for a secret dip in the pool.

In the late 1950s, Stargell joined such baseball greats as Tommy Harper, Curt Motton, and Robert Davis on the Encinal High School baseball team. Even as a 5-foot-10, 165-pound teenage, he could swat home runs.  He was an all-around athlete, lettering not only in baseball but also in basketball and football. He decided to stick with baseball after tiring of constantly being tackled in football. His nickname, "Pops," grew from those early years. He would help out anyone who needed it and hit anything you could throw at him.

Years later, with the Pittsburgh Pirates, Stargell thanked the people who helped him up along the way, including Patterson and his mentor, Encinal High School coach Don Grant. During those receptions, Stargell would talk about the discrimination he experienced as a Black baseball player in New Mexico. One incident happened in the minor leagues, where an angry fan once confronted him with a shotgun, but he quickly won them over with his power and personality. He always placed merit above color or skin. While playing for the Pirates’ farm club in Asheville, N.C., he was nicknamed "On the Hill Will" for the long homers he hit onto a hillside far beyond the right-field fence.

The nickname was revived when Stargell bought a chicken restaurant in Pittsburgh’s Hill District. Stargell is the only player in history to sweep MVP honors, winning it in the 1979 NL playoffs and World Series and sharing the regular-season NL MVP with Keith Hernandez of St. Louis. Stargell, who hit 475 homers and batted in 1,540 runs, compiled a. 282-lifetime batting average during his 21 seasons with the Pittsburgh Pirates. After his playing career, he volunteered to help the NAACP and the fight against Sickle Cell Anemia.

However, Stargell became ill and less active during the last couple of years. He died from a kidney disorder at the New Hanover Regional Medical Center in Wilmington, N.C., on April 9, 2001.