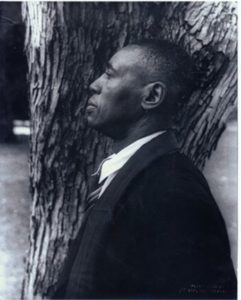 *This date marks the birth of Horace Pippin in 1888. He was a Black folk artist known for his primitivist depictions of Black life in America and on the horrors of war.

Born in West Chester, Pa., Pippin's childhood was spent in Goshen, N.Y., a town that sometimes appears in his paintings. There he drew horses at the local racetrack and, to the despair of his schoolteachers, preferred drawing to writing.  He was employed as an ironworker, junk dealer, and porter until World War I, when he served in the infantry. He was wounded in 1918, discharged with a partially paralyzed right arm, and classified as unfit to work.

He settled back in West Chester and eventually began to paint by burning designs into wood panels with a red-hot poker and then filling the outlined areas with paint. His first large canvas was a protest against war, "End of the War: Starting Home" (1931-34), which was followed by other antiwar pictures, such as "Shell Holes and Observation Balloon" and the many versions of "Holy Mountain." His most popular themes centered on African Americans, such as his series entitled "Cabin in the Cotton" and his paintings of episodes in the life of the anti-slavery leader John Brown.

After the art world discovered Pippin in 1937, these pictures mainly brought him wide acclaim as one of the greatest Black painters of his time. Pippin also executed portraits and biblical subjects. His early works are characterized by their heavy impasto and restricted use of color. His later works are more precisely painted in a bolder palette. Horace Pippin died on July 6, 1946.

02:10
Description:
Mike Taylor is a sculptor artist.  In this segment, he talks about the value of the audience to him as an artist.
Tags:
Theatre / The Arts
STATS: 950 Views
Share: