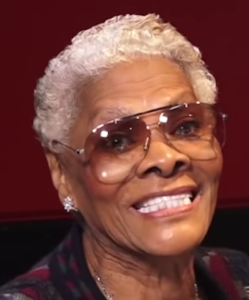 *Dionne Warwick was born on this date in 1940. She is a Black six-time Grammy Award-winning singer, UN ambassador, actress, and television host.

Marie Dionne Warrick was born in Orange, New Jersey, to Mancel Warrick and Lee Drinkard. Her mother was manager of the Drinkard Singers, and her father was a Pullman porter, chef, record promoter, and CPA. Dionne was named after her aunt on her mother's side. She had a sister, Delia ("Dee Dee"), who died in 2008, and a brother, Mancel Jr., who was killed in an accident in 1968 at age 21. She is the cousin of Whitney Houston. Her parents were African American, and she also has Native American, Brazilian and Dutch ancestry.

As a child, she was a Girl Scout for a while. After finishing East Orange High School in 1959, Warwick pursued her passion at the Hartt College of Music in West Hartford, Connecticut. She also worked with her group singing backing vocals for recording sessions in New York City. During one session, Warwick met Burt Bacharach, who hired her to record demos featuring songs written by him and lyricist Hal David. She later landed her record deal.

Warwick was signed to Bacharach's and David's production company, according to Warwick, which in turn was signed to Scepter Records in 1962 by Greenberg. The partnership would give Bacharach the freedom to produce Warwick without the control of the recording company. Warwick's musical ability and education would also allow Bacharach to compose more challenging tunes. In November 1962, Scepter Records released her first solo single, "Don't Make Me Over."  Warwick had found out that "Make It Easy on Yourself," a song on which she had recorded the original demo and had wanted to be her first single release, had been given to another artist, Jerry Butler.

The demo version of "It's Love That Counts", along with her original demo of "Make It Easy on Yourself", would surface on Warwick's debut Scepter album, Presenting Dionne Warwick, released in early 1963. From the phrase "don't make me over", Bacharach and David created their first top 40 pop hit (#21) and a top 5 U.S. R&B hit.  According to July 14, 1967, Time magazine article, she left school after "Don't Make Me Over" hit in 1962. She went on a tour of France, where critics crowned her "Paris' Black Pearl," having been introduced on stage at Paris Olympia that year by Marlene Dietrich.

The two immediate follow-ups to "Don't Make Me Over" "This Empty Place" (with "B" side "Wishin' and Hopin' " later recorded by Dusty Springfield) and "Make the Music Play" charted briefly in the top 100. Her fourth single, "Anyone Who Had a Heart," released in November 1963, was Warwick's first top 10 pop hit (#8) in the U.S. and an international million-seller. This was followed by "Walk On By" in April 1964, another major international hit and million-seller that solidified her career. For the rest of the 1960s, Warwick was a fixture on the U.S. and Canadian charts, and much of her output from 1962 to 1971 was written and produced by the Bacharach/David team.

Warwick ranks among the 40 biggest hitmakers of the entire Pop era (1955–1999), based on the Billboard Hot 100 Pop Singles Charts. She is one of the most-charted female vocalists of all time, with 56 of her singles making the Billboard Hot 100 between 1962 and 1998 and 80 singles making all Billboard charts combined.   She is former United Nations Global Ambassador for the Food and Agriculture Organization and United States Ambassador of Health.  In 2011, the New Jazz style CD Only Trust Your Heart was released, featuring many Sammy Cahn songs. In March 2011, Warwick appeared on The Celebrity Apprentice 4. Her charity was the Hunger Project. She was dismissed from her "apprenticeship" to Donald Trump during the fourth season.

In February 2012, Warwick performed "Walk On By" on The Jonathan Ross Show. She also received the Goldene Kamera Musical Lifetime Achievement Award in Germany and performed "That's What Friends Are For" at the ceremony.  In 2012, Warwick headlined the World Hunger Day concert at London's Royal Albert Hall. She sang the anthem, One World One Song, specially written for the Hunger Project, and was joined by Joe McElderry, the London Community Gospel Choir, and a choir from Woodbridge School, Woodbridge, Suffolk.  In 2012, the 50th anniversary CD, NOW, was released; Warwick recorded 12 Bacharach/David tracks. On September 19, 2013, she collaborated with country singer Billy Ray Cyrus for his song "Hope Is Just Ahead."

In 2014, the duet's album Feels So Good was released.  In 2015, Warwick's website released the Tropical Love EP with five unreleased tracks from the Aquarel Do Brasil Sessions in 1994 - To Say Goodbye (Pra Dizer Adeus) with Edu Lobo - Love Me - Lullaby - Bridges (Travessia) - Rainy Day Girl with Ivan Lins.  In 2016, she was inducted into the Rhythm & Blues Hall of Fame. In 2017, she performed a benefit in Chicago for the Center on Halstead, an organization that contributes to the LGBTQ community. Rahm Emanuel and Barack Obama co-chaired this event.  In 2020, she appeared as the Mouse on season 3 of The Masked Singer.