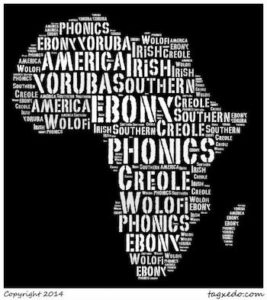 This word combines "ebony" and "phonics" and was intended to describe the language of people of Black African ancestry in North America and West African people. It emphasizes African roots; since 1996, it has been used to emphasize independence from (standard) English.

The initial use of "Ebonics" was by psychologist Robert Williams in a dialogue with Ernie Smith in a conference on "Cognitive and Language Development of the Black Child" in St. Louis in 1973.  Two years later, the word appeared within the title and text of a book edited and co-written by Williams, "Ebonics: The True Language of Black Folks." Some writers stress how the term speaks for a view of the language of African Americans as African rather than European.

Ebonics did not appear in the second edition of the Oxford English Dictionary, published in 1989, and linguists did not use it. The term was not popular among those who agreed with the reason for coining it.  It is used very little, even within the Ebonics book, in which "Black English" is the far more familiar name.

In 1996, the term became widely known in America from its use by the Oakland School Board to recognize the primary language of many African American children attending school and to help in the teaching of Standard English.  Since then, Ebonics has become little more than an alternative term for African American Vernacular English, emphasizing its African roots and its independence from English.