The Hebrew Tribe of Dan, a story 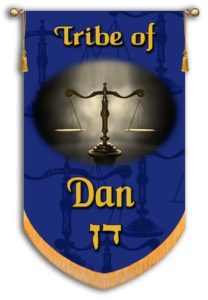 *On this date in 1977, the Hebrew tribe of Dan is briefly described.  Though the community has existed since 1000 BCE, we chose this date because it was the date Israel formally acknowledged the tribe of Dan as Jewish.

According to the Torah (Hebrew Bible), the Tribe of Dan, also sometimes spelled as "Dann", was one of the twelve Tribes of Israel.  Following the completion of the conquest of Canaan by the Israelite tribes after about 1200 BCE, Joshua allocated the land among the twelve tribes. Dan was allocated the most northerly region, to the north of the Galilee, and west of the Jordan, stretching north as far as Laish, Dan's main city (which became known as Dan).  In the Biblical census of the Book of Numbers, the tribe of Dan is portrayed as the second largest Israelite tribe (after Juda).

Some textual scholars regard the census as being from the Priestly Source, dating it to around the 7th century BC, and more likely to reflect the biases of its authors, though this still implies that Dan was one of the largest tribes at a point fresh to the memories of the 7th century BC.  In the Blessing of Moses, which some textual scholars regard as dating from only slightly earlier than the Deuteronomist,  Dan is seemingly prophesied to leap from Bashan; scholars are uncertain why this should be since the tribe are not recorded as having ever been resident in the Bashan plain, which lies to the east of the Jordan.

From after the conquest of the land by Joshua until the formation of the first Kingdom of Israel in c. 1050 BC, the Tribe of Dan was a part of a loose confederation of Israelite tribes. No central government existed, and in times of crisis the people were led by ad hoc leaders known as Judges.  With the growth of the threat from Philistine incursions, the Israelite tribes decided to form a strong centralized monarchy to meet the challenge, and the Tribe of Dan joined the new kingdom with Saul as the first king. After the death of Saul, all the tribes other than Judah remained loyal to the House of Saul, but after the death of Ish-bosheth, Saul's son and successor to the throne of Israel, the Tribe of Dan joined the other northern Israelite tribes in making David, who was then the king of Judah, king of a re-united Kingdom of Israel.

However, on the accession of Rehoboam, David's grandson, in c. 930 BC the northern tribes split from the House of David to reform a Kingdom of Israel as the Northern Kingdom. Dan was a member of the kingdom until the kingdom was conquered by Assyria in c. 723 BC and the population deported.  From that time, the Tribe of Dan has been counted as one of the Ten Lost Tribes of Israel. According to the Torah, the tribe consisted of descendants of Dan a son of Jacob and Bilhah, Rachel's maidservant (Genesis 30:4). In the Biblical account, Dan is one of the two children of Bilhah, a Rachel's handmaid, one of Jacob's wives, the other child of Bilhah being Naphtali; scholars see this as indicating that the authors saw Dan and Naphtali as being not of entirely Israelite origin (hence descendants of handmaids rather than of full wives).

It is worth noting that the territory of the handmaid tribes happens to be the territory closest to the north and eastern borders of Canaan; they were the most exposed to Israel's immediate enemies - Assyria and Aram.   According to the biblical narrative, the tribe had originally tried to settle in the central coastal area of Palestine, but due to hostility with the Philistines who had already settled there, were only able to camp in the hill country overlooking the Sorek Valley, the camp location becoming known as Mahaneh Dan ("Camps of Dan").

The region they were trying to settle included the area as far north as Joppa and extending south into the Shephelah in the area of Timnah; as a result, the modern state of Israel, as well as some Zionists, refer to the region as Gush Dan (the Dan area). However, as a consequence of the pressure from the Philistines, the tribe abandoned hopes of settling near the central coast, instead migrating to the north of the country, and after conquering Laish, re-founded it as their capital (renaming it Dan).  Modern artists use the "scales of justice," a pagan symbol, to represent the Tribe of Dan due to Genesis 49:16 referencing Dan judging his people. However, more traditional artists use a snake to represent Dan, based on Genesis 49:17. The most famous Danite was Samson.

03:25
Description:
April Baskin is a Jewish administrator, educator, and racial justice advocate.  In this segment, she describes "Audacious Hospitality" one of the progressive components of the Union of Reform Judaism
Tags:
Religion
STATS: 1092 Views
Share: